Share your stories about the Gothic Sector and your battle reports.
Locked
44 posts 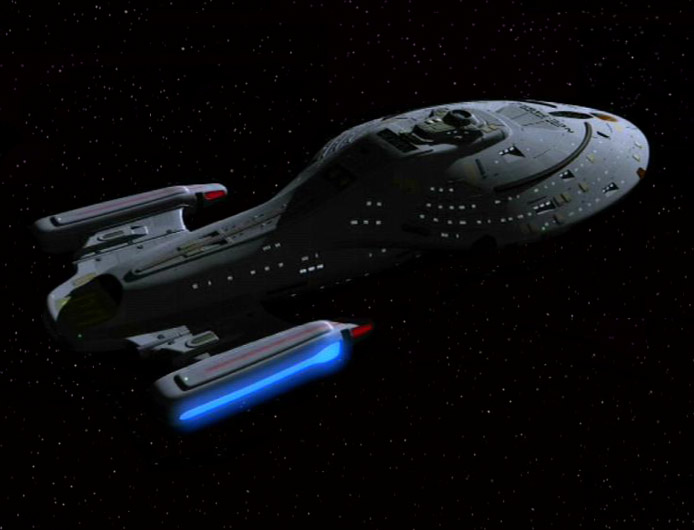 Lore:
These ships where not designed primarily as combat vessels, but as versatile science and exploration ships.
The Intrepid had various system upgrades and innovations over previous classes, the ships tiny size (barely over 300 meters) making it more convenient for construction and servicing, the design philosophy of 'small and smart' showing in it's compact and efficient construction.

Despite its primary function as an exploration vessel, the ship is not poorly armed.
She has 13 phaser arrays, 4 phaser banks banks, torpedo launchers that could fire proton torps, Tricobalt devices and Quantum torpedoes and the capacity to fire a Graviton Beam. This armament is considered fairly impressive by Star Trek standards, being comparable in many ways to the armament found on the much larger Galaxy-Class, making the intrepid a surprisingly dangerous combatant. 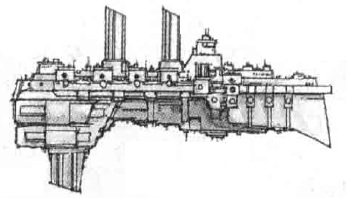 Lore:
The Iconoclast is the terror of convoy operations across the Imperium: being in extensive service with Pirate and Heretic fleets. The ship is small (1.3 Km) and poorly armored even for an escort, but has a savage armament of weapon batteries and capable of impressive speed. The ship's origins can be traced back to Battlefleet Calixis, but the destroyer has not seen service with Imperial forces for many millennial: almost all Iconoclasts seen in M41 being constructed in underground ship yards in and around asteroid fields and deep-space stations, any space-capable planet also being entirely capable of building the simple warships.

As such these vessels are considered as numerous as the stars themselves, groups of Iconoclasts being located in nearly every corner of the galaxy, ready to tear into unsuspecting shipping with lethal intent.
The armaments and internal systems of Iconoclasts vary greatly from ship to ship, being infinitely variable depending on her traitorous or outlawed captain's preferences. But all Iconoclasts are quite capable of bringing down even mighty Battleships in large enough groups, and have the cargo capacity to haul of hefty sum of trophies from the wreckage.

Armaments:
10x Plasma or Laser Weapon Batteries (5 per side, most common variant)*

*Varries greatly from ship to ship

Armaments:
In terms of raw damage, the Iconoclast weapon batteries are more powerful that phasers by a long shot. While the Type-9 phasers are technically capable of penetrating void shielding based on power calcs, it wouldn't be a quick or easy endeavor; the iconoclasts armor (although thin by 40K standards) also capable of resisting phaser strikes. By comparison, the plasma or laser weapon batteries (while much less accurate) are entirely capable of overpowering the deflector shields (although it may take more than one salvo) and tear through an Intrepid's hull with contemptuous ease.
However, Intrepid has the trump card of having tropeodes, tricobalt devices and a Gravitation beam: all of which are entirely capable of destroying an Iconoclast (even if shielded in a few cases). So no edge to either here, as both can quite easily kill the other.

Range:
The Iconoclast's maximum engagement range is around 10,000 Km (depending on its armaments) but often engages at much closer ranges. The Intrepid Maximum range isn't explicitly known, but it's safe to assume the two will engage each other at close range. Draw.

Combat speed:
The two are large similar in terms of mobility, and both are displayed as engaging in sweeping maneuver-based combat. So they are equals here.

Durability:
The Intrepid is entirely dependent on its shield. While the multi-spectrum deflector shields are theoretically capable of resisting weapons in the power range of the Iconoclast, they can't do it for long. On the other hand, The escort Void Sheilds are quite capable of resisting phasers for upwards of an hour, and the Iconoclast is armored like a dreadnought compared to the much smaller Star Trek vessel. This goes quite clearly in favour of the Iconoclast.

Comparison outside of combat

The Intrepid gets the clear victory when it comes to versatility outside of combat.
The Iconoclast being only suitable for combat and transport operations, where Intrepid can fill many peace-time roles, as is the nature of Star Trek vessels.

In terms of construction, the Iconoclast has the edge in terms of simplicity, but may cost more due to its size.
She is a much simpler and cheaper deign to construct than the Intrepid, although she is much larger so will consume a greater number of resources. For that reason, neither have an edge over the other.

In terms of out of combat speed the two are fairly even in stellar travel, but the Iconoclast using warp travel is at a distinct disadvantage to Intredpid's Warp drives. The Intrepid wins here.

Service life is no competition between the two ships, as Iconoclasts can serve for thousands of years if not lost in combat. Iconoclast has the edge for service life.

Well, combat between the two vessels will almost always come in the form of a surprise attack by 3 or more of the Iconoclasts on a lone Intrepid. In this case, the vessel stands almost no chance of surviving the opening stages of the battle.
However, if we assume a 1v1 scenario where both are aiming with killer intent, the battle is actually surprisingly even. While the Iconoclast is has flat out better standard weapons and protection, as well as neither having the edge over the other in speed, the tiny size of the Star Trek vessel and the dodgy targeting equipment of the Iconoclast may well make the Intrepid a very difficult target for the Iconoclast to kill. If the captain of the Intrepid is competent and makes use of all the weapons at his/her disposal: there is no reason why the Intrepid shouldn't be able to destroy a lone Iconoclast and escape with little or no damage taken.

But given that Iconoclast never deploy alone, it's much more likely the Intrepid will be destroyed in fairly short order; possibly taking one or two Iconoclasts with them while trying to escape (if the Intrepid even survives the opening salvo from 3 or more Iconoclasts, as mentioned).

Overall the Intrepid is a superior vessel considering its size and versatility outside of combat, but the Iconoclast wins in most situations where the two ships meet in combat.
And so, the born-and-bread combat vessel wins out as a combatant (although a 1v1 scenario would be a close battle), but the Intrepid is the superior ship in every other respect excluding cargo space.
Last edited by CALiGeR190 on 26 May 2016, 17:10, edited 1 time in total.
Where's your Federation now?
-Imperial Navy

Be sure to keep sending suggetions to me as to what you want next!

The next thing I've got planned is either the Apocalypse BB vs Eclipse SSD or Retribution vs Executor SSD if I don't get any requests.
Where's your Federation now?
-Imperial Navy

Though, I would prefer SDF-1 Macross (DYRL) vs. Styx-class battlecruiser.
"There is no such thing as innocence, merely variety of degrees of guilt" - Inquisitorial motto.
Top

Though, I would prefer SDF-1 Macross (DYRL) vs. Styx-class battlecruiser.

... yeah, no, that's not happening.
Don't really want to touch the mind-bending anime multi-verse stuff if I can help it.
Where's your Federation now?
-Imperial Navy

These are genuinely interesting to read. BTW, how about Mass Effect's Normandy SR2 (equipped with the thanix cannon, of course) versus a cobra-class destroyer?
Top

randuir wrote:These are genuinely interesting to read. BTW, how about Mass Effect's Normandy SR2 (equipped with the thanix cannon, of course) versus a cobra-class destroyer?

I'll do some poking around.
Where's your Federation now?
-Imperial Navy

What about Spear of Adun vs Cairn-class Tomb Ship? Spear is pretty OP in Starcraft universe, but so are Necrons in 40k.

Lt.Hargrove wrote:What about Spear of Adun vs Cairn-class Tomb Ship? Spear is pretty OP in Starcraft universe, but so are Necrons in 40k.

I highly doubt the Adun is any threat to a Tomb ship.
The Adun may be huge and have some pretty fancy abilities, but the Necrons can just bend reality to make their ships impossibly tough and mobile then proceed strip the ship of any protection and purge all life.

The Adun is also a one off (I know it wasn't originally, but its the last of its kind), a Tomb ship doesn't always travel alone. Its a very one-sided comparison, Nercrons are potentially THE most OP thing in Si-Fi in space lore-wise, and are pretty broken on the TT (excluding literal gods, like Q, for example).
Where's your Federation now?
-Imperial Navy

I would imagine that the Intrepid would have much better maneuverability to the Iconoclast. Star Trek ships were down to have great agility, depending on the helm and the captain working together.
One other variable to mention: if the Iconoclast had a jury-rigged teleporter, and they manage to board the Intrepid, the Federation ship would be quite boned. Personal combat is about as effective as the Tau in close combat.
Emperor DAMNIT, but do I hate autocorrect.

Inspector of War wrote:I would imagine that the Intrepid would have much better maneuverability to the Iconoclast. Star Trek ships were down to have great agility, depending on the helm and the captain working together.
One other variable to mention: if the Iconoclast had a jury-rigged teleporter, and they manage to board the Intrepid, the Federation ship would be quite boned. Personal combat is about as effective as the Tau in close combat.

The Iconclast is actually very similar to the Intrepid for mobility based on clacs.
Bare in mind the intrepid is fairly typical in terms of ST Mobilaty but the Iconoclast is among the fastest ships in 40K. The difference between the two is quite small despite the size difference.

And yep, you're right on bourding, most iconoclasts go for immobilised enemies, harpoon the bastard; then bourd them via hull-melta charges. Either form of bourding fucks up the Intrepid, but I prefer not to bring bourding into the equation in these comparisons. It almost always favours 40K.
Where's your Federation now?
-Imperial Navy

Return to “Stories and Lore”